My Health Career has been following the 2012 nursing grad jobs crisis since news of it first broke in December 2012. As at December 2012, the numbers of graduate nurses who had been employed were 30% in Tasmania, 10% in Queensland, 50% in South Australia and 800 individuals in Victoria.

You can read stories and documents relating to the crisis here:

January 2013 – the Federal Government tightened the 457 visa requirements, making it more difficult for overseas nurses to work in Australia.

May 2013 – The Australian Nursing and Midwifery Federation’s South Australian Branch CEO Elizabeth Dabars was on a morning radio show, stating that the government should hire graduate nurses now so that they stay in the health system. The loss of nursing graduates now will cost the government more money in the future.   https://soundcloud.com/anmfsa/5aa-mornings-140513

In May 2013, the Victorian Government budget committed to funding a further 600 graduate nurse positions over 4 years.

In May 2013 at the International Congress of Nursing held in Melbourne, Health Workforce Australia were quoted as stating that 30% of the 2012 graduate nurses did not have jobs:

July 2013 – Queensland Health’s division in Brisbane metro north announced that they would be making around 140 experienced nurses redundant to create jobs for nursing graduates, up until this time they had hired 12 graduate nurses for the year, when the number is usually 100

At an event in August 2013 for health students, My Health Career heard from a Brisbane-based GP that he had two nursing graduates working in his practice as receptionists as they were unable to find nursing jobs.

Is it all bad news for nursing?

Health Workforce Australia is predicting a shortage of 109,000 nurses in Australia by the year 2025. Their data also suggests that somewhere around 2015 to 2016 that there will be a widening gap between the supply and demand of nurses. That is, there will be a shortage in the number of nurses that increases from 2016 and beyond. 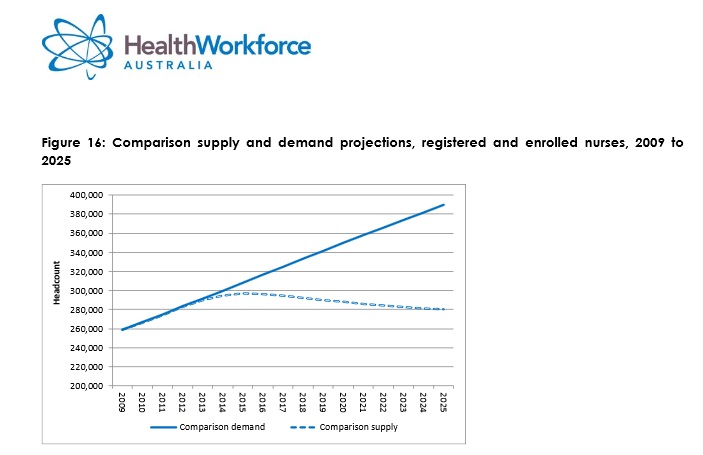 One of the main issues that graduate nurses face is that traditionally in Australia, many graduates have entered graduate nursing programs in their first year after graduation. At the end of 2012, there were not enough places in these graduate programs for the number of nursing students graduating.

According to the Australian Institute of Health and Welfare’s Nursing and Midwifery Workforce 2011, approximately 40% of Australia’s 283,577 nurses were aged 50 and over. It would appear that although recruiters prefer nurses with experience, there may come a time when they are forced to fill their vacancies with new graduates. Assuming that nurses retire at age 65, this implies that a significant proportion of experienced nurses will be leaving the workforce in the next 5-15 years, leading to better job prospects for new graduates. If this were the case, training courses such as the Emerging Nurse Leader Program would become more important as nursing may see a shift towards young nurses as leaders.

2012 nursing graduate Laurie Bickhoff, who was successful in obtaining a job gives tips for nursing graduates here. Considering a career in nursing? Be sure to go to our summary page here which covers the highs and lows of this career.