Shelley Straw qualified as an Eye & Ear Nurse in 1982, and worked in the Royal Victorian Eye and Ear Hospital for close to 25 years. From ward nursing to Deputy Director of Nursing, she had done it all. In 2006 she had an idea about establishing the first Ear Hygiene Clinic in Australia. Crystal Clear Ears has grown to 7 nurses working across 4 clinics with a base of almost 20,000 patients.

Following on from Shelley’s second article about setting up specialist ear clinics from scratch, My Health Career asked Shelley about what it has been like out to roll out multiple clinics, and where she sees opportunities for future growth.

“Well, it’s one thing to have a great idea, and then to actually see how it would look in say, 5 years time, and then do something about implementing it. I needed to learn what it was that I didn’t know, and that bit was definitely the area of Small Business Management.Many of my family had run their own businesses, but I had been working on a wage, in the public hospital sector for a long time. So, I did a Small Business Start- up course at Swinburne Institute of Technology, which was an absolute godsend. As well as meeting other people who were starting up their own businesses, the lectures and the financial spreadsheet templates were extremely useful. The number one bit of useful advice, was “Your start up business will take twice as long, and cost twice as much as you think it will! Be prepared!”

I am not naturally good at Maths or anything to do with figures and spreadsheets, so I gained a lot of confidence from that course. I also worked out, that I needed to continue some part time work to support myself whilst the business was consolidating, and to pay for the equipment and rent. Luckily, Nursing has a lot of opportunity for part-time casual work, and I was able to continue in another role at The Eye & Ear Hospital in the evenings and weekends.

I started working as a sole practitioner in one clinic, but I always saw my goal as training and employing other nurses, and to open up other clinics as demand grew. I probably could have been a bit better at setting a time-line to achieve this, although I really needed to “suck it and see…” (in more ways than one!) as this model of ear care was untested in Australia. I also had only a vague idea of how many clinics I wanted to set up. It really helped to have a business advisor (a friend of ours) who was experienced in growing a business, to help keep me on track, work out what my goals were, and what I ultimately wanted to achieve.

What opportunities do I see for these types of clinics in Australia? The sky is the limit, both nationally and internationally. This method is very popular, we started with Zero patients nine years ago, and now have almost 35,000 patients on our database.  Medicare unfortunately does not cover a service run by ear nurses, which is a pain, but our growth has occurred despite this hurdle. We have people visiting us from interstate, because there are no clinics like this in their state.

Yes, I can’t quite believe it, I sometimes feel like a little girl playing ‘running a clinic or playing at shops’! All our nurses are so proud to be the trail blazers of this new specialty in Australia, and the ultimate compliment, is that another similar clinic has set up in Melbourne.

I see the growth of Micro-suction clinics across Australia as a really good thing. They promote best practice ear hygiene care for the public, reducing the risk of Eardrum perforations and infections from the use of water syringing. Apart from the obvious effect on hearing, some people become dizzy, or develop tinnitus from an ear full of wax.

These clinics help to prevent this, by regular visits for removal of wax.  This method improves the hearing of people who wear hearing aids, by keeping the wax from accumulating and blocking their hearing, and prevents damage to the hearing aid from stuck wax. Hearing aids are quite expensive, so protecting them is important. Hearing well is vital for communicating with each other, and hearing problems are a particular issue for older people, and their cognitive abilities.” 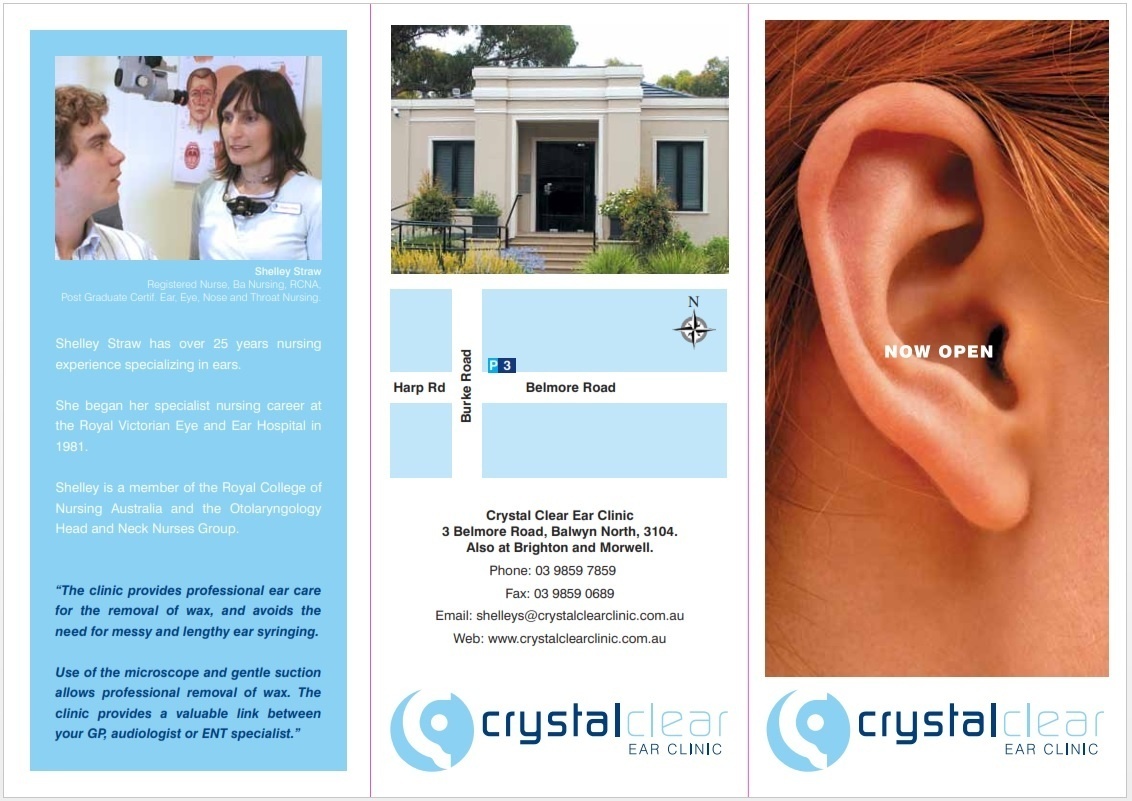 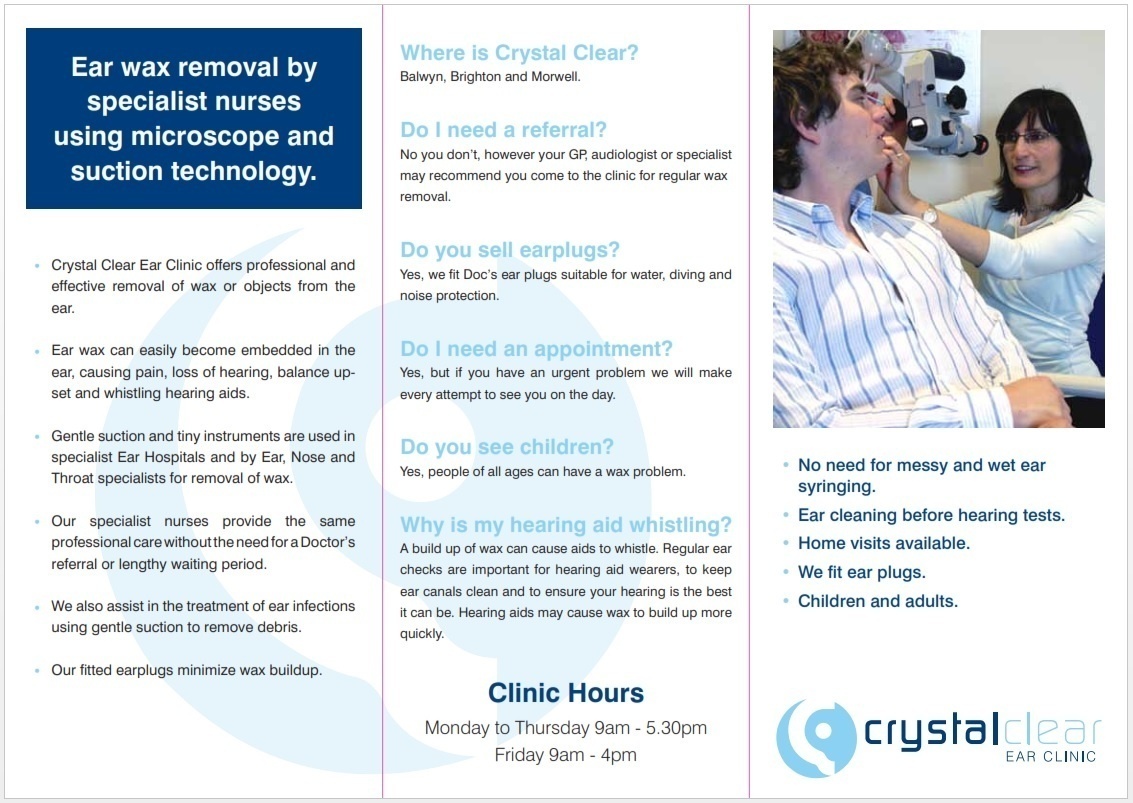 Shelley became a registered nurse in 1978, and after working as a nurse in Western Australia, returned to Melbourne and qualified as an Eye & Ear Nurse in 1982 at The Royal Victorian Eye & Ear Hospital, Melbourne. Shelley then worked at the Eye & Ear for close to 25 years. Her roles included ward nursing, Nurse in Charge roles, followed by appointment to the role of Deputy Director of Nursing. This role then morphed into a Clinical Services Management role, including Risk Management, Human Resources, Policy & procedure review, Project Management, & general ‘go-to person’ for problem solving. During that time, she continued to study, and expand her skills.

By 2006 she had come up with the idea of establishing the first Ear Hygiene Clinic in Australia, and moved onto pursue this new career path. It was an exciting venture, and was initially coupled with working part-time at an Eye & Ear day surgery clinic, then After hours coordinator work at The Eye & Ear hospital. The clinics use the best practice method of Micro-suction ear hygiene, rather than water syringing. The latest advancement at Crystal Clear Ears is the development of a nationally accredited training course in Micro-suction and Aural Hygiene.

Since the opening of Crystal Clear Ears seven years ago, the clinic has grown from a sole practitioner in one clinic, to 12 nurses, working across 9 clinics in the suburbs of Melbourne, and Gippsland. The patient numbers have grown from zero to almost 35,000, with many people attending the clinics regularly.