This is the fourth and final post in my series from the Digital Health Summit at CES 2015, following on from posts on wearables, disrupting the doctor visit, and how pharmacy can avoid its own Kodak moment.

It was fantastic to see the program include a session on the patient perspective, as all too often discussion about what they want and need from healthcare occurs without actually including any patients!

The first story was presented in a highly appropriate way, when Adam Jackson, CEO of Dr on Demand (the telemedicine service I spoke about in my previous post) video conferenced in the patient using the Dr on Demand app, giving us all a great illustration of the quality and simplicity of the product.

The patient spoke about how much easier Dr on Demand had made it for her to access the regular advice she needed to help her manage her endometriosis, ending with  sharing the happy news that she’s now pregnant, which she attributed in part to the better control she now has of her own health.

Following on from this theme, Ray Dorsey MD and Professor of Neurology, presented information on a study on using telemedicine to treat patients with Parkinson’s disease. The study found on average, patients saved 200 minutes of time for each consult when attending via a video link rather than traveling to see their neurologist.  He read out a letter from a grateful patient who said how much he appreciated being able to have his consult conducted via video from home, as it had allowed him to stay home and unfreeze his pipes during a cold snap!  It  showed the things patients consider as the biggest benefits are not always the things we expect. 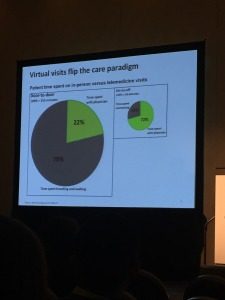 A husband and wife told their story about how new hearing aid technology had impacted on their lives, with the wife talking about the family and social impact that hearing loss has, and the husband reminding us of the economic impact; his hearing loss had the potential to end his career as a management consultant. Traditional hearing aids hadn’t been able to resolve either of these problems satisfactorily, but the new generation iPhone-controlled aid he was utilising had allowed him to re-engage socially, and maintain his career and earning potential.

Jaime Rupert told a fascinating story of her experience using BrainMD after suffering a concussion and how it not only enabled her recovery but was a tool that she was continuing to use on an ongoing basis. Bryan Hixon, the CEO of BrainMD spoke about how their EEG technology scanned electrical activity rather than anatomy of the brain, and gave a great analogy comparing the brain to a computer; most computer problems stem from software, not hardware, and brains are the same. Traditional post-concussion investigations focus on the anatomy of the brain (which is still important to check is ok), and then once it has been confirmed that there is no structural damage, it’s a matter of waiting it out. Using this now readily accessible EEG technology allowed Jaime to complete ‘brain training’ exercises that facilitated her recovery. A link to this presentation is included below.

The final patient story presented saw Dr Christopher Iobst, a Pediatric Orthopedic Surgeon, explain the advances in technology for limb lengthening, which meant that this process was now possible with significantly reductions in both trauma and recovery time, and as the delightful 11-year-old girl whose story he told skipped up on stage! It perfectly  illustrated just what a positive outcome had been delivered.

The diversity of the stories provided great examples of the breadth of impact that technology is playing in improving healthcare outcomes, and the involvement of the patients and the authenticity of their stories was incredibly powerful. This was one of my favorite sessions, and it’s definitely a lead I hope more healthcare conference organisers follow. 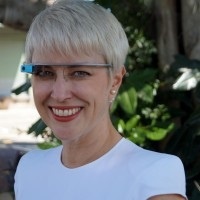 Cathie was named one of the Top 100 Women of Influence by the Australian Financial Review in 2013, won a National Telstra Business Women’s Award in 2011 and was recognised by Monash University with a Distinguished Alumni Award for Professional Achievement in 2012.

She is a strong advocate of wearable technology and social media in healthcare and the role they can play in actively engaging society to manage their own health outcomes. Cathie is focused on development of innovative technology solutions to better meet the challenges of the sector. Cathie also has a blog at cathiereid.com.

This post was originally posted here on Cathie’s blog and has been reposted on My Health Career with Cathie’s permission.