A survey of 2013 Australian university graduates has found that 83.3% had found a full-time job by December 2013. Another 6.8% were not working but seeking full-time employment and, 9.9% were working in a part-time or casual position but seeking a full time job. That’s a total of 16.7% seeking a full-time job, or approximately 1 in 6. The survey was carried out by Graduate Careers Australia, and published in their GradStats document. 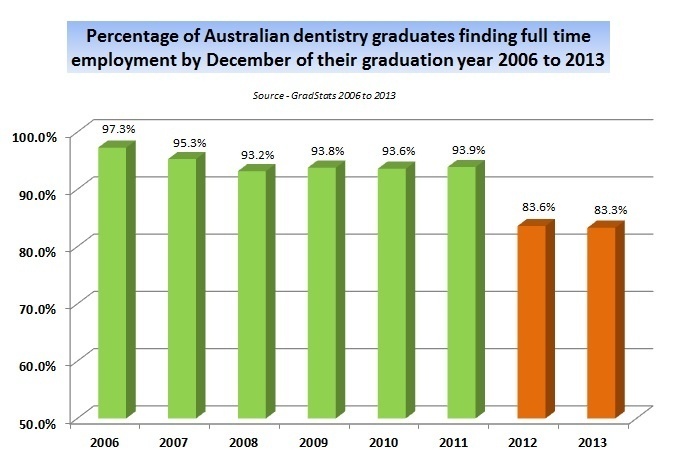 The Australian Dental Association (ADA) so far hasn’t gone on a media blitz as they did in January 2013, which followed on from the 2012 data. For more information on the ADA’s perspectives on the drop in dental graduate employment rate, and how it came about, click here. The ADA has publicly documented its concerns about the dental workforce predictions since 2010.

In late 2013, the Australian Dental Association made a submission to the Australian Workforce and Productivity Agency. In the submission, the ADA stated that a survey of recent graduates in Victoria revealed that 61% had encountered difficulties obtaining work. They also reported that previous workforce data suggested that approximately 15,000 dentists would be required in Australia by 2020, and that this figure has already been exceeded. We will have to wait until June/July 2014 to see if the ADA submission is effective in removing the profession of dentistry from the Skilled Occupation List.

A study published in October 2013 focused on the practice to population ratio in New South Wales and Western Australia. It showed that this ratio ranged from 1:52 to 1:20,100 in different areas in these states. The greatest concentration of dental practices relative to the population are in the core of the capital cities in these two states. Marc Tennant, one of the authors of this study, advocates that there are jobs available for dentists throughout Australia, and that the Australian Dental Association’s Positions Vacant page reflects this.

The Australian Dental Students Association has a rural policy which acknowledges that there is a mal-distribution of dentists in Australia, with 79% of dentists being employed in major cities. They are encouraging dental graduates to work in areas of need. The Australian Dental Students Association have recently updated their Dental Workforce Oversupply policy. On 27th January they posted on their Facebook page that they will be starting a Dental Workforce Campaign soon: 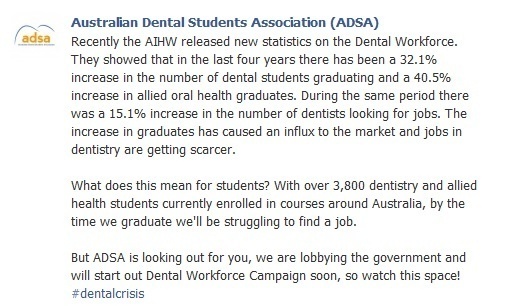