Freaking out – my deepest, darkest fears as a health practitioner

For my entire twelve and eleven twelfths year career as an optometrist I’d struggled with my emotions. I think it had started when I was a new graduate in 2004, and because the repetitive thought pattern stayed on, I was always second-guessing everything I did, being completely paranoid about “missing something” and somebody going blind or losing vision, and comparing my consultation records to that of the previous optometrist secretly hoping that they hadn’t noticed anything I’d overlooked. This went on for years, until November 2016.

But I was the master at hiding my deepest, darkest fears.

So many people I’d worked with over those years had asked me what my secret was because I looked like I had it alltogether and was always able to handle whatever came my way in the practice. I always brushed it off, citing “I don’t know” or “I just want to do a good job,” which was true.

However, what was also true was that I was dying on the inside.

Looking back now it makes me laugh. And then almost cry. And then get caught in this sick feeling that the vast majority of practitioners in the health industry, who are technically competent, are caught up in the same pattern of thinking that I used to find myself in.

And I say used to because my practice as an optometrist was completely transformed in November last year when mindful self-compassion showed up for me for the first time. And I should say that it “showed up” because I had a number of mindfulness teachers guiding me through the process of cultivating it. And I’d cultivated it to the point where it literally just “showed up” when I needed it because I was “in trouble”.

So I was in “Cooma” locuming for a week, and morale in the practice was really low. There were staff who had been in hospital due to ill-health secondary to stress, people not showing up for work because mentally they needed a day off, and a manager who genuinely wanted to do a good job, but was completely overwhelmed. The patient flow in the practice with 3 optometrists was way too much for the number of dispensing staff, and so things were a bit out of hand. The manager was constantly in a passive-aggressive state, the regular optometrists weren’t coping and so I was taking up the slack. On this particular Thursday, it was my turn to cop the passive-aggressive talking-down from the manager.

It’s about now that I ask…… what would you have done in this situation?

I’ll give you the run down on what happened for me……..

The three elements of self-compassion showed up. So it was perhaps a little unorthodox in the actual words (and when I say words, I mean thoughts – I didn’t say anything out loud, and this all happened in a few seconds) that went with it, but you will get my drift:

And I realised that what I needed in that moment was to understand that it didn’t matter what circus was going on out the front of the practice. When I was in the consulting room with each patient, I had my allotted time to spend with them, the door was closed, and I could just do my thing. The manager had absolutely no impact on what I did in the consulting room. 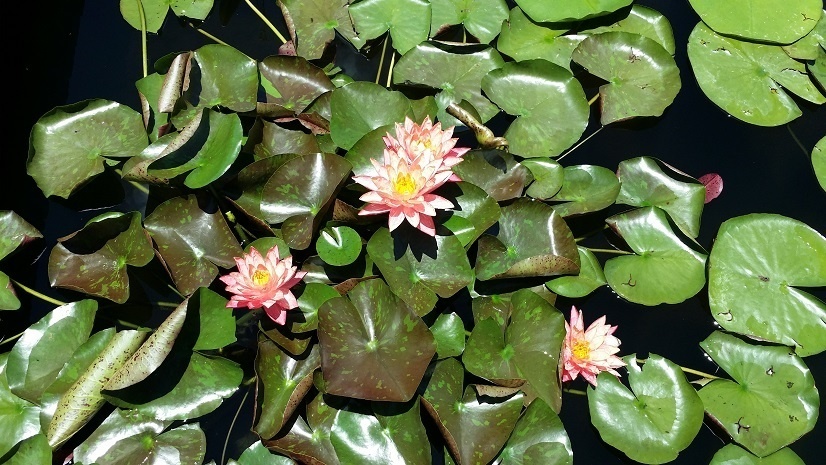 And you know what?

The other thing that happened was that I was able to wish the manager well and hope that things would improve for her as I could see how much she was struggling. I was then able to get on with my day, be present with my patients and enjoy myself.

Yep. You couldn’t make this stuff up…….

Was my version of self-compassion all warm and fuzzy like you might expect it to be? No!!

Was my version of self-compassion a little bit sweary because sometimes I do swear in my head (even though I would never swear out loud when I’m in with a patient)? Yes!!

Do I care that my version of mindful self-compassion wasn’t all “nice” and “pretty” like the lotus flowers on all the mindfulness websites and brochures? No!! It was really effective!!

One of the biggest hurdles I faced in developing self-compassion was in thinking that I was being asked to lower my standards. Interestingly, I have found that there is a paradox here. When I was in my old perfectionistic habits, I would only raise the bar to a certain height because I knew that I wouldn’t be able to handle my emotions if I failed to reach my goal. I thought that I was a legend because I could do all of this stuff really well….. the only problem was, that all of that stuff I was doing was within my comfort zone, which was very, very small.

So then enter self-compassion. Because now when I fail to reach a goal I say to myself something along the lines of “you tried, sometimes when us humans are doing something new, we fail, and that’s just what happens because we’re human…. what do I need right this very second in order to be okay with this?” I can repeat this process many more times and get further in raising the bar than I would have been able to in the same time frame if I had gone back to my old perfectionistic ways and beating myself up for any failure that occurred.

If you’re interested in starting your journey into mindful self-compassion and want a deeper understanding of self-esteem vs self-compassion, watch the video here by Kristin Neff:

Another personal hurdle that came up was that I got caught up in the “backdraft” of self-compassion during the process of cultivating it. In this definition of backdraft that was given in the 4 day mindful self-compassion course I went to in December 2016, it talked about backdraft being “discomfort that may arise”. In my case it was more like heartache to a gut-wrenching level to the point where I was in agony. I think they call that psychological distress (which is why you might need to consider seeing a psychologist to guide you through that process if you have experienced some previous traumas that might be dredged back up). 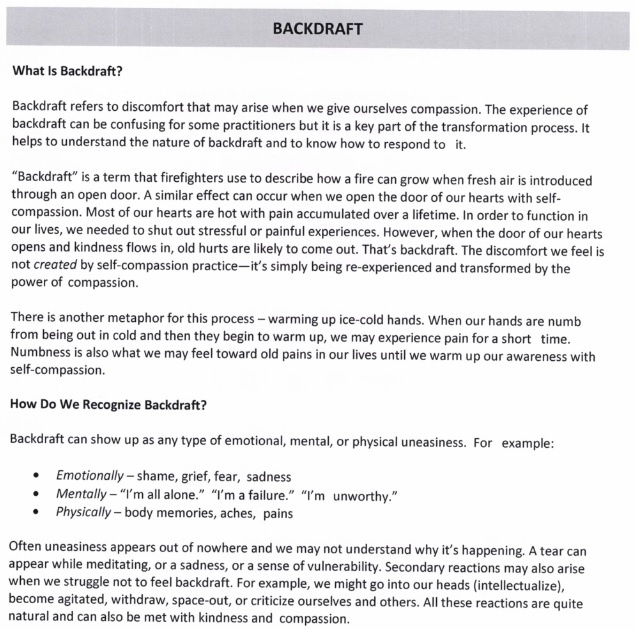 So, um, yeah. I think what tends to happen is that when people talk about mindfulness and meditation and mindful-self compassion, there is this connotation that it’s all going to be sunshine and lollipops, and so they think they’re “doing it wrong” when all sorts of other stuff comes up.

I will never forget the day I could honestly say that I was the practitioner I had always pretended to be. The thing is, when you have the ability to be in the middle of a s*#t storm that is happening, as so often does when you’re a health practitioner, and you can just get on with “doing your thing” it really does transform the way you practice.
Am I saying I’m in this space all day every day?

No! Of course not, but I’m getting better at noticing when I’m not and being able to come back to seeing what I need at any given point in time.

Am I saying that I have everything under control?

Absolutely not!! I can’t control things like the Optos not booting up in the morning, patients being particularly demanding or working in practices where my co-workers and I don’t really gel.

But I do have the ability now to realise that there will always be things that won’t be in my control, and that what I can do is be mindful of that and give myself whatever it is that I need in that moment.

And that has completely transformed my practice.

Right now I’m excitedly watching the posts from the Center for Mindful Self-Compassion’s Facebook page because Kristin Neff is developing a new mindful self-compassion program for health care providers. I would love to be involved in bringing this to Australia when it’s available. Please email enquiries@myhealthcareer.com.au if you are interested in getting on board with that!

Amanda Griffiths is the founder of My Health Career. Since starting the website she has been an invited speaker for organisations including the Career Development Association of Australia and Career Education Association of Victoria, myfuture, and the Master of Ceremonies at the HealthFusion Team Challenge. She graduated from her optometry degree with first class honours in 2003, and spent two years as a part-time clinical supervisor of optometry students in a university setting. Amanda has worked as an optometrist in full time, part time and locum roles that have stretched from far north Queensland to Tasmania. She is currently doing her first locum stint in Western Australia.